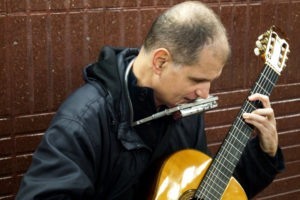 Close-up of Martí Batalla playing the guitar and harmonica in Barcelona’s Metro.

INTERVIEW IN THE MAGAZINE “EL TEMPS”

I’m 56 years old. I just recorded a record with guitar and harmonica. Specifically, I make classical music. I began to study music seriously at age 13 but, due to life circumstances, I had to leave and resume many times. I had a little zascandil life, but in the end I finished the guitar career. I have the title of guitar teacher at the Conservatory of the Lyceum, but I have never liked to do classes.

Whenever I went down the subway I found a musician who played the guitar and asked him to leave it for a few minutes. Until in the end he told me: ‘Martí, there are some oppositions, some tests to play in the subway. Why don’t you sign up? ‘ I told him ‘they will not approve me, I will suspend’. And he, what do you say? You will take it out. ‘I said it at home, to my wife, about playing on the subway … It was all obstacles, right? ‘Why do you have to do it? If this is asking for charity… ’But the next day I got up and said‘ You know what? I’m going to the subway musicians’ association to take the test! ’I took the barges to Arc de Triomphe and went to take the exam. And after fifteen days I receive the news that I was accepted.

At AMUC we sign up on a grill and so we can all go everywhere at some point. It works a bit like the fish market. I wanted to go on Tuesday 21 to Verdaguer, at 3 pm. And I have been told that it is already full. Well, I have taken another schedule.

The subway musician’s job is not to ask for charity. The task of the underground musician is to exalt the sick spirits. We are the doctors of the spirits. Those who cure tired spirits.

I play in the subway two or three days a week. Now that I am pre-retired I can devote myself fully to music. I already wanted to dedicate myself to young music but the outings they offered me did not interest me. The piano teacher told me that the best way out for me would be to teach ONCE. This did not interest me.

My grandmother had a liquor store and before she died she saw that the liquor store would not be left by anyone. My father offered me to turn it into a musical instrument store. During the morning I and another partner would sell instruments and in the afternoon I would teach. I said no. Then I lost interest pearl music. Then I knew what I didn’t want more than what I wanted.

At last I now do what I really want to do: play the guitar and the harmonica. I have an album with pieces by Erik Satie, Ave Maria de Schubert, etc., which is called Sea Sensations.

I am blind due to the incubator. They gave me more oxygen than normal and burned my retina. All right. Life is so. There must be blind, there must be lame, morons, diabetics … In the world there must be everything. It was my turn to be blind and that’s it. Full stop.

This has not represented any problem for me to be a subway musician. Here I am one more. »